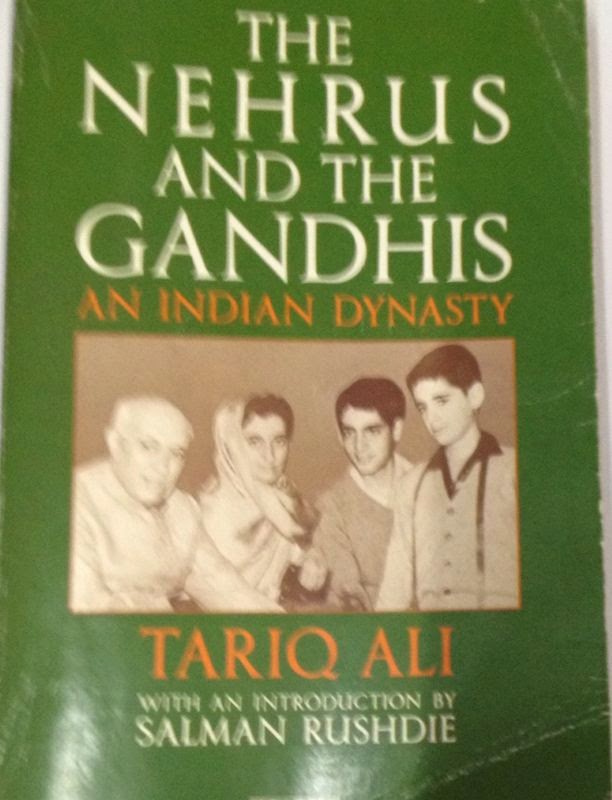 PART-I
The 300 page book penned by Tariq Ali and first published in 1985 with an introduction by Salman Rushdie, is of course a historical rendering worth reading. The author has covered a time span of 95 years, 1889 to 1984, to be precise; Or in other words, from the birth of Jawahar Lal to the ‘reign’ of his grandson Rajiv Gandhi. That is, it doesn’t cover Rajiv’s assassination, Sonia taking over the helm of affairs and later sharing it with her son Rahul. And recently the channels have reported that Priyanka is going to assume charge of the Congress party! She has denied it anyway; Good heavens, long live the dynasty!

At the outset, let me say that the name of the book sounded a little misnomer, at least to me who still consider ‘Gandhi’ as Mahatma Gandhi . The author might have named thus considering the patriarchal heresy of Rajiv Gandhi as son of Feroze Gandhi.  I have recently read Gandhiji’s  great grandson  Anand Gokani mentioned as ‘Gandhi kin’. Yes, what it definitely counts is whether the dissent is maternal or paternal!

The book, a truthful –that’s what I felt-compilation of political as well as personal lives of the Nehru Family, is very much readable and not at all drab. It is a very fascinating 95 year long journey through the annals of Indian history and partly world history. The story of a family turning out to be that of a great nation!  ‘The Parties’ and ‘The Politicians’, are also listed for easy reference.

This is simply my scribbling on the book, ie, a  review is not in my purview. The quotes from the book are either given as "  "  or thus -. Let the book speak for itself.

The Nehrus were the descendants of Raj Kaul who was relocated to Allhabad from Kashmir. “The immigrant from Kashmir was provided with land and house adjoining a canal. The Urdu word for canal is nehar .” Thus the one’s from the canal came to be known as  Neharis and later on Nehru’s.

Why did the British deny mass education to Indians?
-The British consciously decided not to alter the rural landscape of India. To do so, they believed would rapidly create the conditions for their own removal from the region.


-They denied mass education and as Lord Macaulay desired, they created a class who may be interpreters between us and the millions they govern. Indian in blood and color, but English in taste, in opinions, in morals and in intellect.

There are many anecdotes in the book, which none of us might have come across in our history lessons.

·        Nehru, Feroze, Indira, Subhash Chandra Bose and the like were referred to as the left wing sympathizers within Congress!
·
After the Chauri Chaura incident, 3 congress volunteers who were poor peasants, were arrested and hanged after trial.  They have never appeared in the Congress list of martyrs. Neither Gandhi nor Congress working committee shed tears on their behalf.
·        Gandhi had refused to plead Bhagath Singh’s case-(the book answers the question why).
·
General Dyer, responsible for the massacre in Jallianwalla Bagh, and Nehru happened to travel together in the same compartment, on a trip to Delhi from Amritsar! Nehru himself has recorded it in his autobiography.

-The butcher of Jallianwallah Bagh and the future Prime Minister of India travelling, even sleeping, in the same compartment was history’s more grotesque ironies”, says the author.


·  Nehru women had participated in the remembrance  week held for the martyrs of Jallianwala  Bagh. Nehru was in prison.


-At the head of the demonstration, which was illegal, there was a frail old woman dresses in white .She was batton- charged by the police and received several blows to the head, until a police officer recognized her, lifted her from the ground, put in her in a car and drove home. The woman was SWARUP RANI(Nehru’s mother).

·        Other ironies-
Nehru offered huge sums to the royal families of the erstwhile Princely States to integrate with the Indian Union. His daughter cut down all these privileges during 1971.

In 1947, the Delhi Muslims who lost all their fortunes and relatives stayed back in Delhi without fleeing to Pak honouring the requests by Abul Kalam Azad and Nehru. But after 29 years, Nehru’s grandson, watched by his daughter rendered them homeless-(The Turkman Gate incident).

Nehru had left strict instructions in his will that he he was not to be given a religious funeral.But his daughter raised a religious funeral for him.
·
In November 1937 the ‘Calcutta Modern Review’ published an anonymous article which argued that men like Nehru, were endangering democracy. “...In spite of his brave talk , Jawaharlal is obviously tired and stale.....Let us not spoil him by too much adulation and praise....” It run thus and surely did create a furore. That anonymous letter was written by none other than Nehru himself!

·        Nehru’s “An Autobiography”- was reprinted nine times in the year of publishing itself!

·        Nehru and Gandhi had to release press statements-that is public explanations- as to why Feroze-Indira marriage was endorsed!
-India’s two most important political leaders had been compelled, at a politically critical moment, to expend part of their energy on justifying the decision of two people to marry each other.

·        Feroze once questioned Nehru on some security bungle and ultimately the PM Nehru had to apologize to the MP Feroze in Parliament.

Quotes
-The Ganga is a liquid history of India.

-Family life has traditionally been seen as a refuge from the pain and cold of the world that lies outside..The bruises inflicted are often invisible. Even when the actual pain has gone, the suppressed anger can stay with the victim for the rest of his life.

-His(Nehru’s)  parents and his wife were now all dead; his link with the past was broken. He decided it was time to strengthen his links with the future.

-Our educated community is not a cultured community, but a community of qualified candidates-Rabindranatha Tagore

-“How did you manage  to so wonderfully isolate yourself from the people, in such a short space of time? ”Nehru, to Congress leaders of Kerala after they lost the 1957 elections  to communists.

-that he (Nehru) was happiest when attacked by the right for being “soft on socialism and communalism” and by the left for being “an agent of capitalism and reaction." That, he would say, “makes me feel I’m on the right course."

-Never do anything in secret or anything that you wish to hide. For the desire to hide anything means you are afraid, and fear is a bad thing and unworthy of you....Nehru to Indira in the first of his 200 letters from prison.

-“Little did we guess, that we would never see his wide toothless smile again, nor feel the glow of protection”-Indira on Gandhiji’s assassination.

-"We never hated you personally"-Indira to Churchill at London when he was amazed that a man(Nehru) the British had locked up for many years seemed to harbor no ill will. Churchill’s answer was "But I did, I did."